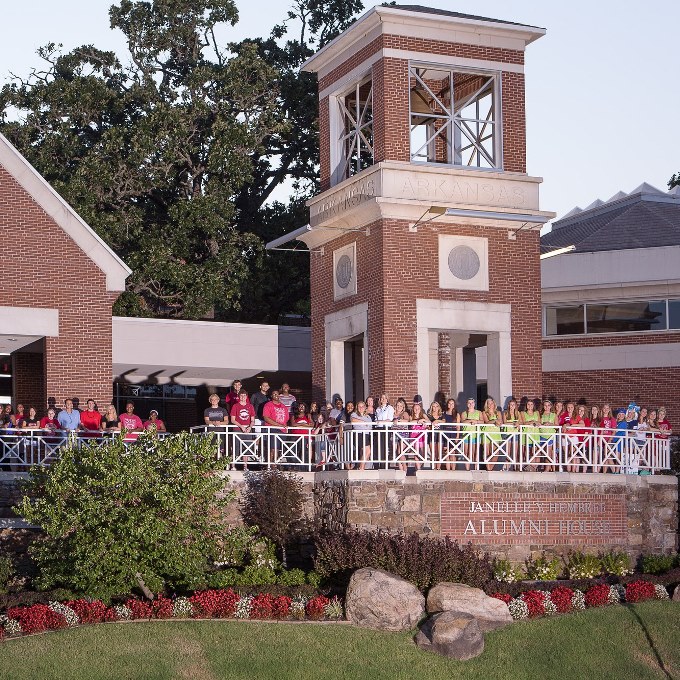 Benefactors K. Denise Henderson of Hot Springs and N.W. “Chip” Buerger of Dripping Springs, Texas, are multiplying their gifts’ impacts across campus by strategically dividing them between areas that are most meaningful to them. Making gifts in this way gives both donors the opportunity to make singular gifts with multiple designations, a fitting way to pay tribute to the areas in which they are most passionate.

Henderson, an alumna who holds a Bachelor of Science in Home Economics, says her experience at the university had an incredible impact on her life and her career. As a tribute to that impact, Henderson is investing in three areas that hold special meaning to her with a $600,000 planned gift, which will be divided equally between the Dale Bumpers College of Agricultural, Food and Life Sciences; the Women’s Giving Circle and the Arkansas Alumni Association.

Two scholarships – the K. Denise Henderson Endowed Scholarship in the School of Human Environmental Sciences and the Mike and Kris Macechko Endowed Alumni Scholarship – will benefit from her generosity and be used to attract and retain high-caliber students, with the ultimate goal of increasing the university’s retention and graduation rates. A graduate of the Bumpers College and a former Arkansas Alumni Association board member, Henderson chose these designations because of the great experience she had as a student and later as a volunteer, specifically working with former Arkansas Alumni Association Executive Director Mike Macechko.

The remaining $200,000 of Henderson’s gift will be used to create a permanent endowment for the Women’s Giving Circle, a program that encourages women as philanthropic leaders while supporting worthwhile research and programs on campus through pooled funding from its members. The endowment will give the circle the opportunity to disperse funds regularly through their annual grant-making cycle and enhance the programming capabilities of the organization.

A member herself, Henderson chose the Women’s Giving Circle as one of her designations because she cares deeply about women’s education in Arkansas.

“Her endowment for the Women’s Giving Circle is the first of its kind and will significantly benefit that organization,” said Chris Wyrick, vice chancellor for university advancement. “The Women’s Giving Circle has grown into a strong group that has a reputation for supporting some of the most innovative programs and research on our campus. Denise’s gift reflects her belief in the circle’s ability to grow a community of philanthropists, and her endowment will provide it with a permanent funding source to ensure its success.”

Similarly, Buerger has opted to designate his $500,000 planned gift to three colleges – the J. William Fulbright College of Arts and Sciences, the College of Engineering and the Sam M. Walton College of Business - and create endowed scholarships in each.

“I have benefitted greatly in my career by educational opportunities,” said Buerger. “My endowment to the university, hopefully, will allow students the opportunity to get an education that will help them all their lives and will be the base of their careers. I hope my contribution will help the university grow and continue to attract deserving bright students.

“I really do admire and respect the university,” he continued. “The growth of the campus and the academic programs over the past five years has been impressive.”

Buerger chose these designations because of the role each played in his life. “I chose business because of the way I made my living,” he said. “Business educated me on how to do tasks, how to lead, how to mentor and how to teach. My business education provided the building blocks – along with hard work – to make my three careers successful.

“Engineering was chosen because of the basic discipline of the field and the different methods of problem solving that have served me well in my three careers. And, finally, I chose Fulbright College because I love and collect art. Building homes was creative and fulfilling, so I wanted to give back to others pursuing creative endeavors.”